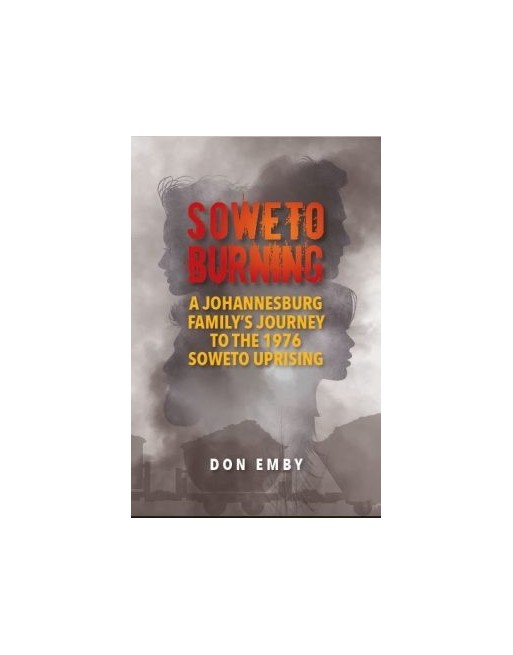 In the 1970s a young woman decides to hike the Fish River Canyon in Namibia, and an  American Catholic priest journeys to Soweto to care for abused women and children.

These seemingly unrelated strands form the foundation of a family’s journey to a day that would forever change them – and the country in which they live. Wednesday 16 June 1976, the day on which high school pupils in Soweto organised a riot to protest against the use of Afrikaans as a medium of education, marked a clear watershed for South Africa.

Soweto Burning is part factual history and part fictional novel, portrays the parallel journey of a family and a country to a crescendo that rocked the world. It starkly illustrates how this dramatic turning point, and the policy of racial segregation through Apartheid,

affected one white family and the country as a whole; how our actions impact on others, and how even one courageous decision can change countless lives.

Donald Emby was born in 1949 in Durban, South Africa. He attended Potchefstroom Boy’s High, Matriculating in 1966. The following year was spent in the Airforce Gymnasium and in 1968 he entered Medical School at the University of the Witwatersrand; graduating at the end of 1973. Much of his clinical training was at Baragwanath Hospital. After four years in general medicine, he specialised in Radiology, obtaining his Fellowship in 1982. For the last twenty-five years of his career, he served as a Consultant Radiologist to the South African Mining Industry.

Having played rugby at school and at university, he subsequently spent ten years as a student of the martial arts. When work and family commitments curtailed his time for sporting activities, he took up road running and dabbled in canoeing. In later life, he developed a keen interest in nature conservation and birding.

He retired from full-time Radiological Practice in 2012, having contributed more than 20 articles to the Medical literature; and turned his hand to non-medical writing.

‘Having written extensively on the history of South Africa, I found Soweto Burning a vivid and pleasurable read. It is a well-executed blend of South Africa’s complex past, the country and the region’s natural beauty, and the lives of the small group of individuals representing the many white South Africans who recognised the deplorable truth about Apartheid. The absorbing, well-researched narrative and varied components, makes it a page-turner and at the same